Where Will Teams Stay During FIFA World Cup Qatar 2022?

Four- and five-star hotels, resorts, villas, even residential sports academies, and university facilities, make up the majority of the teams' lodging options. 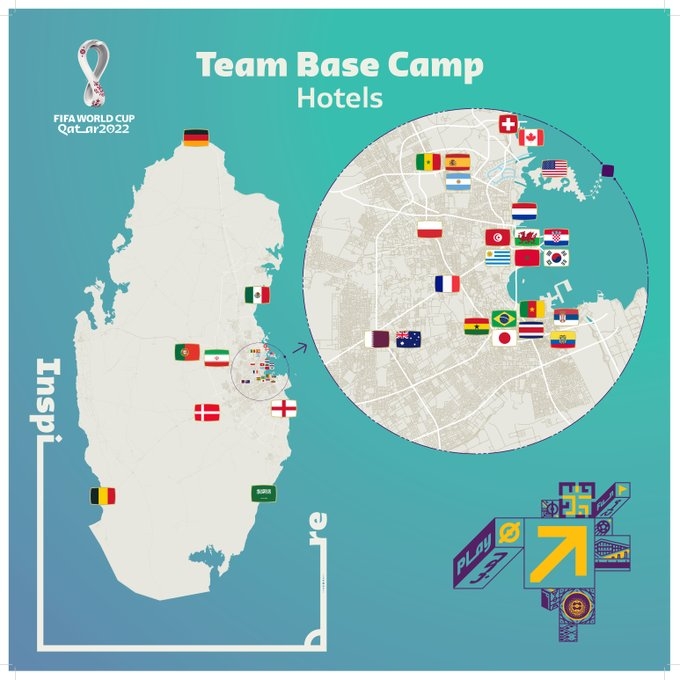 The entire footballing world is in high gear as the 2022 World Cup, which will start in Qatar in less than four months, approaches. The World Cup is a doable event because all the stadiums are only an hour apart. It also suggests that each team will have a single base of operations for the duration of the World Cup.

Authorities recently announced that each team will have its own World Cup training facilities, known as Team Base Camp (TBC). Each team's finalized locations have been determined.

A competing team's base of operations during the competition will be at the Team Base Camp. It combines the best hotel or other lodging option with a site for specialized training.

Each nation was offered a range of lodging alternatives while the World Cup qualifications were still going on, with inspections taking place and a "first come, first serve" policy in force if more than one nation wanted the same base.

24 out of the 32 teams will remain in an area of ten kilometers or less.

Eight teams, including England, Germany, Belgium, and Portugal, have chosen to have their headquarters located farther away from Doha; however, the majority of teams will be staying near the city.

Since the 1930 World Cup, which was played in Uruguay, this one will be the smallest, according to FIFA.

In order to protect the players' privacy and comfort, authorities are closing off a portion of the neighborhood public beach while England is staying at the Souq Al-Wakra hotel.

Argentina and Spain have opted to stay at Qatar University's more modest housing. They will stay in separate accommodations and receive their training in various fields throughout the competition.

According to Nasser Al Khater, CEO of the FIFA World Cup Qatar 2022, every training facility would be of the highest caliber.

He stated, "We're happy to allow spectators to view the world-class facilities that Qatar has created for their national teams. The 32 teams that qualified for the prestigious championship should rest easy knowing they will have the best resources at their disposal to perform well at the World Cup, he added.

Al Khater also made sure to emphasize that the vast bulk of the work put into creating the top-notch facilities for the World Cup will not go to waste after the event. Thanks to Qatar's legacy planning efforts, these resources will be utilized to the utmost degree after the competition.

“As with all our World Cup projects, legacy planning has been a key factor and many of the training sites renovated and built will benefit local clubs and communities long after the tournament has finished. The new hotels will also support Qatar’s growing tourism industry post-2022,” he explained.