In our story, we will go to the 1930 World Cup, the first version of the most important tournament among football tournaments, that version that was held in Uruguay in South America, and the owner of the land was also crowned, but the hero of the story this time was an exceptional person, worthy of appreciation for what he gave to his country.

The legend of the “one-handed god!” 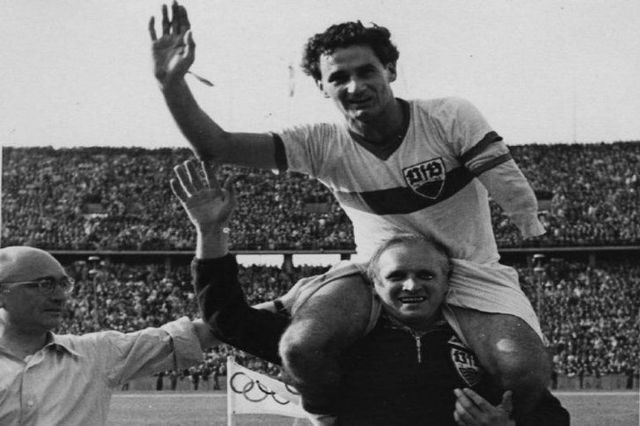 The hero of our story is the legend of the Uruguayan national football team, Hector Castro, known in Uruguay by the name “El Divino Manco”, which means “the one-handed god”, a nickname that Castro loves very much.

Hector Castro, in addition to leading Uruguay to crown the 1930 World Cup, achieved, during a successful 15-year career, 4 other titles as a player with his country and 8 titles as a player and coach with the Uruguayan giants: National Club.

Other than placing his name among the historical scorers of the Uruguayan national team, where he ranked fourth among them, at the time of his retirement.

In 1917, the Uruguayan legend, like many of the greats of South American football, was born in extreme poverty, where he grew up in the city of Montevideo, and like most of the Uruguayan population, the financial conditions of his family forced him to work at the age of 10!

As a result, he had to work in factories that included much heavy machinery, on one of his routine workdays, the 13-year-old stood in front of a machine and seemed to want to sleep. He cut his right forearm with an electric saw, causing permanent deformation of the teenage boy's hand!

When you make glory for your country with one hand

Although international football between teams has existed since 1870, the International Football Association “FIFA” thought about creating a tournament that brought together all the world’s teams under its banner in 1930, when the World Cup was launched for the first time in the history of the largest tournament to this day.

Because of the poverty that spread in Europe in the thirties, Uruguay was chosen as the country to host the first edition of the World Cup, especially as it won the Olympic gold medal twice in a row in 1924 and 1928.

Although FIFA sent an invitation to all affiliated teams in the International Federation to participate in the tournament, only 13 teams agreed to play in the first edition, 7 of them from South America and only 4 from Europe.

In the final match of this tournament, Hector Castro scored in Uruguay's victory over his Latin neighbor, Argentina, when "Pablo Dorado" scored the first goal for the hosts in the 12th minute, before "Carlos Beuselli" equalized in the 20th minute for Tango.

Minutes later, in the 37th minute, Guillermo Stabile scored the second goal of the Tango dancers! The first half ended with a score of 2-1 for Argentina.

But the owners of the land quickly revealed their fangs in the second half and scored 3 goals with the feet of “Pedro Seiya” in the 57th minute and “Santos Irriarty” in the 68th minute, and “Hector Castro” concluded the goal party in the 89th minute to announce the coronation of Uruguay with gold for the first time in its history.

Thus, Hector Castro is the only player to score in the World Cup final, and he only has one hand, so he is called the “one-handed God.”