Engineer Mohamed Al-Atwan, Director of Stadium 974 at the Supreme Committee for Delivery and Legacy, confirmed that the 974 Stadium, one of the eight stadiums that will host the FIFA World Cup Qatar 2022 finals, has received two certificates of sustainability as a confirmation of the efforts made by the Supreme Committee to implement World Cup projects in a sustainable manner, pointing out The State of Qatar has achieved what it promised, adhered to and established strict sustainability standards in all stages of the construction of the eight stadiums. 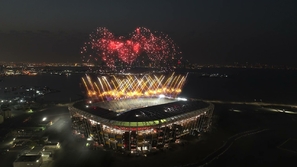 Al-Atwan added in an exclusive statement to Qatar News Agency (QNA): "We are pleased with this great achievement that crowns the efforts of everyone who contributed to the construction of this wonderful stadium, and we look forward with enthusiasm to receiving fans from all over the world next November at the unique World Cup edifice, when it will host matches in The tournament runs from the group stage to the round of 16.

He continued, "Without a doubt, the design of Stadium 974 with a temporary structure using shipping containers was an innovation for new standards in building sustainable stadiums that host major sporting events and events, and undoubtedly what happened today is an achievement added to the series of successes of this unique stadium."

He noted the importance of this design in the legacy stage after the curtain fell on the FIFA World Cup Qatar 2022, as it is planned to completely dismantle the stadium to reuse the containers in developing sports and non-sports projects in Qatar and the world.

He explained that the stadium, which was inaugurated on November 30, 2021, and accommodates about 40,000 fans, reflects the concepts of sustainability and heritage, which are a major part of the planning and hosting process in the World Cup, After a semi-industrial site operated by Qatar Energy Company was transformed into a vital site that hosts a sports facility, a stadium that hosts the World Cup, and it can also be dismantled to be used for other purposes after the tournament.

He stressed that the FIFA World Cup Qatar 2022 will be a sustainable tournament because it takes into account the requirements of sustainability in all stages of the implementation of its projects, starting from design, through construction, and ending with project delivery and operation.

Stadium 974 establishes new standards in the construction and reuse of sustainable facilities, as it is the first stadium that can be completely dismantled and reused for other purposes after the end of the FIFA World Cup Qatar 2022, and this is reflected in the preparation of a flexible design that allows the stadium to be reconstructed with the same capacity in another location, or to build other facilities Smaller, using the same materials, a study on the environmental impact of Stadium 974 was published earlier this year.