Qatar to Be an Entertainment Destination During the World Cup

As the countdown to the inaugural Middle East and Arab World Cup, which will begin at Al Bayt Stadium on 20 November, continues, ticket sales for the FIFA World Cup Qatar 2022 are close to 3 million.

As Qatar gets ready to host 64 matches at eight cutting-edge stadiums for the World Cup, organizers said during a news conference in Doha that an additional 30,000 rooms had been made available to travelers. The Qatar Accommodation Agency offers the broadest selection of lodging. Based on two-person occupancy, rooms can be reserved for as little as $80 per person, each night. Hotel, apartment, and fan village lodging choices are available.

According to the organizers, 2.89 million tickets have been sold for the 64 games that will be played in eight cutting-edge venues. Fans in Qatar, the United States, Saudi Arabia, England, Mexico, the United Arab Emirates, Argentina, France, Brazil, and Germany have shown the greatest demand. Additionally, the tournament broke sales records for hospitality tickets. Fans are urged to keep checking FIFA.com/tickets for the most recent inventory as tickets for all games will continue to go on sale until the tournament is over. Ticket holders will start receiving emails this week with instructions on how to download the ticketing app and access their mobile tickets.

The organizers also provided information on the extensive range of entertainment activities planned for spectators throughout the competition. Up to 40,000 spectators per day will congregate at the FIFA Fan Festival at Al Bidda Park during the competition. There will be free admission, live screenings of games, performances by well-known artists from around the world, and football-related events. There will also be a variety of domestic and foreign food and drink choices.

Additionally, there will be roaming performances, shops, and food and drink vendors throughout the 6-kilometer Corniche Activation from Sheraton Park to the Museum of Islamic Art. The daily "Welcome to Qatar" show, a water and fireworks display, will be among the other events. It will feature music from the Qatar 2022 Official Soundtrack, as well as performances by the Qatar Philharmonic Orchestra and Qatari composer Wael Binali.

Fans will also be able to visit the theme parks, various attractions, the Ras Abu Aboud 974 Beach Club, the Hayya Fan Zone at the Lusail South Promenade, and the QetaiFAN Beach Fest at Al Maha Island Lusail. Dance music fans will swarm to the 5,000-person ARAVIA by MDL BEAST and the 15,000-person Arcadia Spectacular. 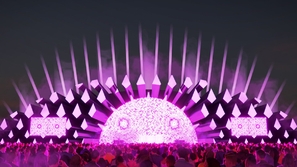 "Due to Qatar's small size, we operate over 168 official locations, each of which is crucial to the smooth operation and successful execution of the 2018 World Cup. The volunteering and accreditation centers are fully operational, going well beyond simply testing the eight stadiums. The ticketing center at the Doha Exhibition & Convention Centre will open tomorrow, and the International Broadcast Centre and Main Media Centre will follow. Colin Smith, FIFA's Chief Operating Officer for the World Cup, stated, "I can only repeat FIFA's confidence and sincere admiration for all the effort prepared to provide the best FIFA World Cup ever in just over one month.