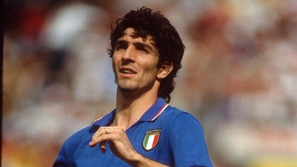 Although Paolo Rossi was banned from playing for two years from 1980 to 1982, Juventus did not hesitate for a moment to sign the striker in 1981.

In May 1982, the Italian striker's ban was lifted for the first time, to participate with Juventus in a very important away match against Udinese, Juve needed to win to stay in the title race with only three games remaining to decide the Serie A title. Paolo Rossi did not disappoint the fans and scored a goal in a match that ended with Juve winning 5-1.

But that match was enough to convince Italy coach Enzo Berzot to bet on Paolo Rossi and choose him to lead the Azzurri attack in the 1982 World Cup, which started just one month after that match.

But unfortunately, “Rossi” presented in the first round of the 1982 World Cup at one of his worst levels, which caused a great attack on him and the coach of the Italian national team because of his adherence to the decision to be with the Azzurri battalion despite his absence from the stadiums for two whole years!

In the end, Italy qualified for the second round by a real miracle, as the Italian team did not achieve any victory, and only scored a single goal against Cameroon throughout the first round.

However, Paolo Rossi returned to be the most popular name on the tongues of everyone in Italy and abroad, after his energies exploded against Brazil in the quarterfinals of the 82 World Cup, where he scored 3 goals alone.

Rossi never forgot that match, even when he released a book in which he tells his autobiography, he called “I made Brazil cry” to bear witness to his historic achievement in eliminating Brazil and winning the World Cup.

Italy qualified for the semi-finals after a historic match unforgettable in the minds of the Italians against Brazil, which ended with a score of 3-2, to meet the Azzurri with his counterpart Poland. In this match, Rossi continued his brilliance and scored two goals that brought his country to the final against West Germany.

In the final, Paolo Rossi opened the scoring for Italy after scoring the first goal against West Germany, that match that ended with the Azzurri winning 3-1, to lead the striker, who ended the harsh two-year suspension, Italy to achieve the 1982 World Cup title in an exceptional way.

With 6 goals scored by Paolo Rossi in the 1982 World Cup, he was crowned with the Golden Boot award as the tournament's top scorer, as well as the Golden Ball award as the best player in the competition.

Thus, Paolo Rossi became a national hero in Italy in the most bizarre circumstance, after everything he went through in just two years, when he managed to pull himself from the bottom and jump to the top of glory.

The story of Paolo Rossi is one of the most inspiring stories in football, as it is unforgettable the fact that it is associated with a huge tournament like the World Cup!