Messi and the "Bisht" Controversy

What happened: On Sunday, 18th December 2022, football fans endured a nail-biting FIFA final between Argentina and France at the Lusail stadium in Qatar as well as an unforgettable moment as Messi stepped up to the platform to receive his long-awaited World Cup trophy.

To commemorate the moment, the Emir of Qatar, Sheikh Tamim bin Hamad, presented the Argentine Captain- Messi with a Bisht, a traditional black cloak worn by Royals or Arab warriors for celebrations and official occasions as a sign of respect and honor.

What is a Bisht?

In the regional Arabic language, "bisht" refers to cloak. It is a mantle for men that was traditionally worn by Arabs hundreds of years ago. Royal Families, politicians, and religious scholars usually wore the traditional Qatari garment, Bisht on special occasions.

What was the controversy?

However, what was supposed to be an iconic moment of Messi donning the Bisht, received severe backlash from the Western media with some calling it a “shame” to cover the winning jersey and some accusing Qatar of “hijacking” the moment and being “selfish” to “force” someone to wear their traditional garment.

UK’s Mirror news outlet said that “Lionel Messi was forced to cover his Argentina shirt with a black and gold robe as he lifted the World Cup trophy in Qatar.” Likewise, English sports broadcaster Gary Lineker said: “It seems a shame, in a way, that they've covered up Messi in his Argentina shirt.”

Football journalist at ESPN Mark Odgen tweeted, “Lionel Messi has spent his entire career waiting to lift the World Cup. When he gets to do it, all the pics are ruined by somebody making him wear a cape that looks like he’s about to have a haircut.”

How did Argentines react to the news?

On the contrary, the Argentines openly appreciated and loved the gesture. They saw it as a “nice touch” to an exceptional night and took pride in receiving the greatest honor you can bestow in the Arab country.

I'm an Argentine and I loved when the Emir gifted to Leo Messi the Bisht. I was guessing its meaning even before reading about it. What a symbol of respect and friendship. I was in love with the picture.

I think it was an honorable gesture to give Messi the Bisht, which gives him the greatness he deserves, and Leo received it with great pride. 👇🏼 https://t.co/xwIydgHXg1

The Argentine fans respond in their own way...to those who object to Messi wearing the BISHT pic.twitter.com/CvXuzDfPfD 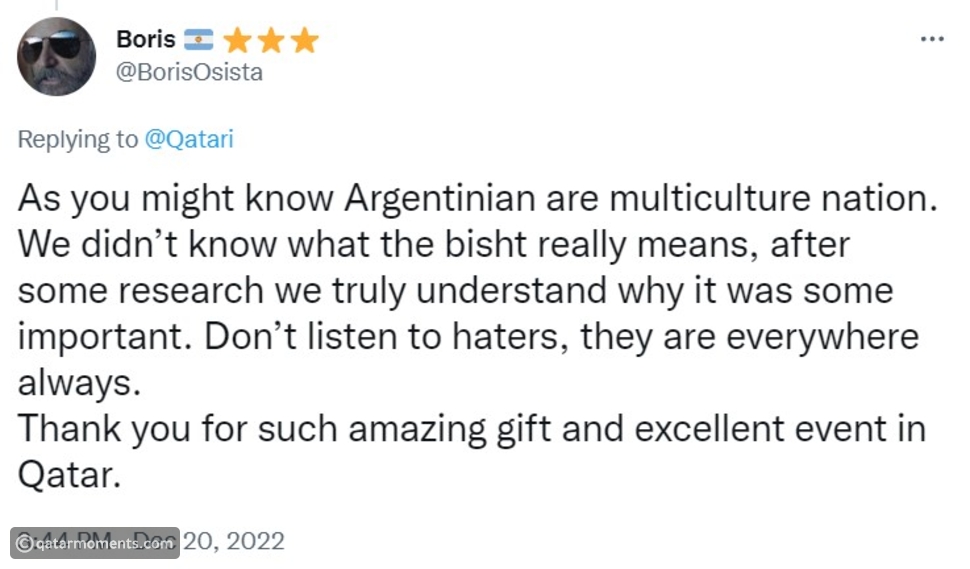 The fact that one of the loudest cheers of the night came when Sheikh Tamim draped the Bisht on Messi’s shoulders tells you what it meant. This is the greatest honour you can bestow on a person in the Arab world. Messi knew it, the people in the stadium knew it. pic.twitter.com/oid9QjCTx2

I'm probably in the minority here but I thought Lionel Messi wearing a bisht was a nice touch.

Bishts are given to Arab warriors after a victory in battle or to royalty...Messi just won the greatest battle of them all and confirmed himself as the king of football. pic.twitter.com/wP9FvZiUAw

A disturbing video of #Messi feeling insulted and violated for being cloaked with the traditional Arab “bisht” pic.twitter.com/MpqYNIWrSc